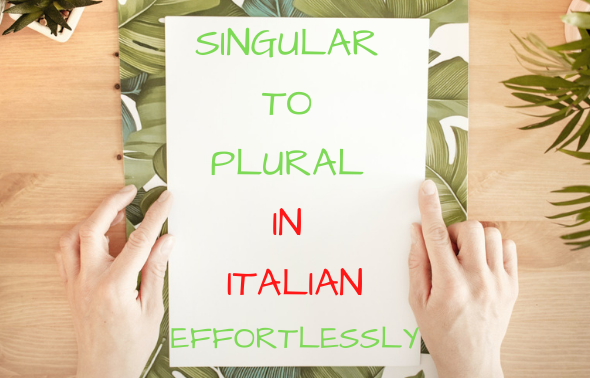 HOW CAN WE CHANGE FROM SINGULAR TO PLURAL IN ITALIAN?

Identify the gender of the noun

In the Italian language, nouns can either be masculine or feminine.

This is one of the easiest ways to change singular to plural in Italian.

Plural: i ragazzi (the boys)

i ragazzi stanno giocando (the boys are playing)

Plural: i libri (the books)

I libri sono belli (the books are beautiful)

N/b: amica is a female friend while amico is a male friend.

For more information and better understanding regarding singular to plural in Italian you can watch the lesson below:

Let’s have a glance at the nouns where the last letter which is always a vowel tends to have an accent. The plural of these words is very simple as it is the same as the singular word. So mainly you don’t have to change or add anything.

Some of the masculine nouns include but are not limited to:

Some of the feminine words include:

Exceptions of the plural in Italian

When you learn Italian, you will discover that there are some exceptions when changing singular words to plural that do not fall in any of the above. Let us have a look.

Here you cannot look at the gender of the noun but rather you have to memorize it by heart. Do not worry; it comes naturally in time. The words include:

– Here we have abstract nouns which include:

– Diseases also do not have a plural added to them. For instance:

It also important to note nouns such as that do not fall in any of the categories mentioned.

You can learn more Italian with us no matter your level; beginner, intermediate or advanced, we have you covered.

Now that we know how to look at some of the words let’s look into the sentence structures.

Keep in mind that to change Italian words singular to plural you need to know this rule: most of the words ending with an A are feminine and it turns into an E, though there are a few masculine words that end with A that turns into an I.

Now that you know how to change singular to plural in Italian, discover the complete guide to Italian reflexive verbs!

We use cookies to ensure that we give you the best experience on our website. If you continue to use this site we will assume that you are happy with it.OkRead more