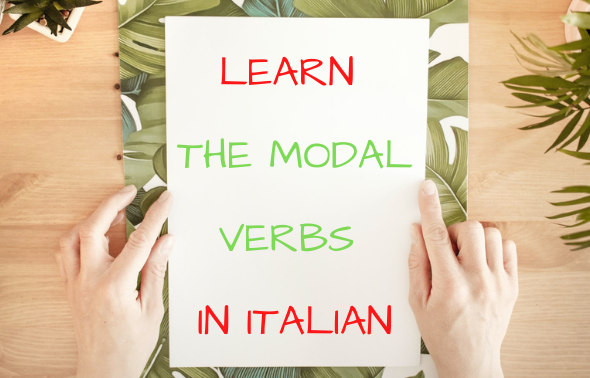 In this lesson, you will learn all you need to know about modal verbs in Italian. Precisely, everybody talks about modal verbs, however, not everybody gets what they are. And that is a real shame since they form the base of many important structures. Modal verbs tend to be in company with the base form of the verb meaning the action, while the modal verb signifies its modality: whether we are referring to ability, likelihood, request, permission, suggestion, obligation, etc.

All Italian modal verbs have irregular present forms, and at least two of them tend to be very confusing for English learners: namely, sapere and potere. But we will get there sooner than you think.

First off, let’s avoid to make our lives more difficult than they already are by breaking the whole thing down to a chart, with examples and explanations that, we hope, will be clarifying:

Then, you will want to see them in action with other base forms. Examples may come in handy:

Now, this is the time when we make clear the difference between potere and sapere (as a modal verb). What do you notice in these examples of modal verbs in Italian?

Do you spot the slight difference between sapere and potere? Sapere would be used as to be able in Italian: it implies permission or an actual ability, something you learned to do: a skill, if you want to get the point rounded up. On the other hand, potere is much more akin to an availability, an endowment: we’d use it as can in Italian.

ITALIAN MODAL VERBS IN PAST: PASSATO PROSSIMO VS IMPERFETTO

A short, special note for when we use Italian modal verbs in past tenses: depending on whether you are using passato prossimo or imperfetto, their meaning can change slightly. Let us take a look at two examples:

So, when you use the imperfetto, you may need to add clarifying information.

We hope that this helps you when it comes to modal verbs in Italian. And now, to consolidate your newly acquired knowledge, test yourself with some exercises.

Would you like to learn more Italian grammar? Take a look at these possessive adjectives and pronouns in Italian!