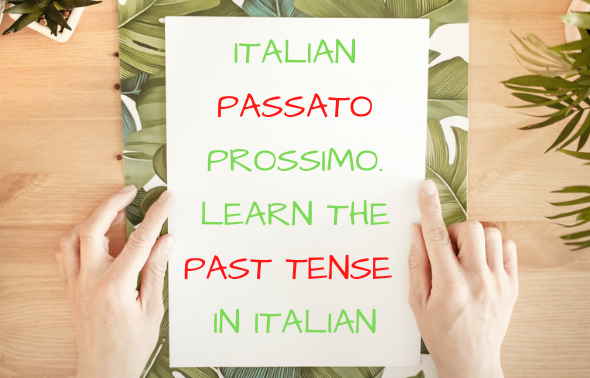 In this post, we will show you how to use the Italian Passato Prossimo. As we already stated in our previous articles about grammar, many non-Italian speakers struggle with verbs because every single verb has to be conjugated for person and number. In addition, there are so many forms and pronunciations that it’s almost impossible not to get at least one verb wrong.

Don’t feel embarrassed if you can’t remember a verb or say “faciuto” instead of “fatto” – done in English – so many Italian people still struggle with the passato prossimo and the participio passato. It’s normal to make mistakes!

Bear in mind that every language can be frustrating to learn and the best thing you can do is KEEP LEARNING! Find an entertaining way to learn and stick to it; grammar is not fun, but instead of using a textbook, try watching a video and taking notes.

To help you out we have provided you with a video made by our fantastic tutor Francesca, click the link down below to learn the Italian passato prossimo. Francesca will also test your skills at the end, so make sure you watch the entire video.

Learn Italian passato prossimo with us.

In Italian, the passato prossimo is used to express past events and actions that are already over. In English, you can choose between the present perfect tense (I have gone) and the simple past tense (I went), while in Italian we use the passato prossimo most of the time. The other past tense (passato remoto) is only used in narratives or when we talk about something that happened a long time ago.

The passato prossimo is composed of the auxiliary verb (to have or to be) and the past participle of the main verb.

To form the past participle (participio passato), you need to follow these rules:

In Italian, there are many irregular verbs that don’t follow the rules mentioned above to form the past participle.

Here is a list of the most used irregular verbs:

As we mentioned before, you can either use the auxiliary verb to have or to be, but remember that they’re used to express different feelings and actions.

– The auxiliary verb “to have” is used to express:

– The auxiliary verb “to be” is used to express:

This auxiliary verb is more challenging to use because you need to pay attention to the person and the number of the subject. For example, we use the auxiliary verb “essere” with the verb “andare”, so the past participle of “andare” changes depending on the subject of the main verb.

Subject of the verb: more people and there is at least one male
Noi siamo andati
Voi siete andati
Loro sono andati

It’s very easy to spot the difference between the two auxiliary verbs, just keep in mind that:

The subject here is a female singular person and that’s why we see the word “andata” instead of “andato”.

The auxiliary verb is “to have”, so it does not matter if the subject is a female or a male.

The subject here is a plural noun and this is why we use “partiti” and not “partito”.

The auxiliary verb is “to have”, so it does not matter the number or gender of the subject.

As you can see, you can use the passato prossimo to translate either the present perfect or the simple past.

So, what’s the best way to learn past tense in Italian faster?

The passato prossimo Italian conjugation is not something you can learn in one day, you need to be dedicated and revise every day.

The best advice we can give you is to learn Italian with a native Italian teacher. The more you speak, the better you get!

Learn Italian online with Blablalang, we promise you it’s worth it!

Would you like to learn more Italian grammar? Discover the Italian indefinite articles!