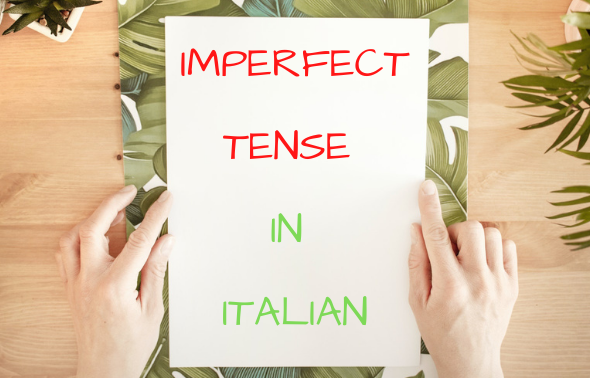 Today we will learn the imperfect tense in Italian, also called “imperfetto”. As you know, when we mention “past” tense from a morphological point of view, it is thought of as one type of word in English (for instance, bought, started, was, were). Since we now learn Italian, we make the distinction between passato prossimo and imperfetto, which we use to represent different things.

HOW TO USE THE IMPERFECT TENSE IN ITALIAN

We need to keep in mind a couple of things about the “imperfetto” in Italian: first off, in the past, as it happens with the present tenses, an imaginary timeline with ongoing events can be pinned by complete actions that took place at specific moments over that timeline.

Let us see how this works. Suppose you are chilling out at the present moment in your living room, but a few seconds, hours, days, years ago your mind or your attention went somewhere else, before you ended up thinking about it in one of those reflexive split seconds one may have every now and then.

Ongoing event: Ti rilassi nel salotto (You are chilling out in the living room).

In the middle of that: Il telefono squilla (The phone rings).

We may represent this with an illustration:

Before we blend these two events into one only sentence, you should know that, as to continuity or consecutiveness, the same ideas populate both English and Italian, but relying, as we just said, on different morphology. Since this is about the imperfetto, one of the tenses to represent past actions, now we will change the verbs to their past forms. So we get:

And now we can piece the above sentences together using some appropriate words (while, as, before, after, when), with the following possible examples:

WHEN TO USE THE IMPERFECT TENSE IN ITALIAN

– You can use the “imperfetto” in Italian to talk about habits you had time ago:

– Also, we can declare we knew an individual from some non-specified time ago:

Did you know my sister could as well be translated into Hai conosciuto mia sorella?, but the situation would be quite diverse: one would say that you didn’t know the person’s sister and you were first introduced during a meeting, party, social event, etc.

– The imperfetto is also used to express past physical qualities or atmospheric, as well as the psychological or emotional state or even feelings. For example:

– The imperfect tense in Italian goes with expressions such as stare + gerund and stare per (meaning be about to):

– Two consecutive ongoing actions can be expressed by using the “imperfetto” in Italian:

Most of the verbs in the imperfect tense in Italian occur as regular. The way to conjugate them is as follows:

As for the irregular verbs, here there are some very typical examples:

We hope this is useful when it is about the imperfect tense in Italian. As usual, to learn Italian, we remind you the importance of continuously practicing. Being faithful to what we preach, below you will find some exercises.

Now that you know everything about the imperfect tense in Italian, take a look at the Italian past tense.